Beyond The Pareto Principle: The Simple Way To Get More Out Of Life

You’ve probably heard of the Pareto Principle. I want to share a similar – but much more powerful – idea that will change how you think about your business, your health, your relationships and living your life in general. This idea will be tricky to implement, but the results will speak for themselves. It’s all about getting more out of less.

The Pareto Principle – aka the “80/20 rule” – states that most outputs in life are generated from a minority of inputs. This is generalized to imply that 80% of results come from 20% of activities.

Achieving such an outcome would be a great result, wouldn’t it?

But what if you could do even better?

What if you could, by doing less work, not only achieve the same outcome but a much better one, by doing far less than you thought? That’s the idea I want to talk about today. The idea of getting more out of less. Pareto’s Principle taken to an extreme.

To help get your mind around this concept, I would like to share a few examples of how this idea plays out in life already, from the worlds of finance, business and nature. Through these examples you will see that this idea has a lot of truth to it. If you look closely at any aspect of life: less is more!

Be wealthier by trading less

Let’s start by looking at wealth and finance. The game of wealth building is really set up to reward people who can figure out how to get a better return on their money.

The best and brightest people are spending tremendous energy figuring out ways to make more money by actively trading, taking bigger risks and even going as far as building computer systems from the ground up to shave microseconds off trade times.

So, what do the wealth building games people are playing show us?

Think of all that wasted effort and money!

The passive index funds, on the other hand, just invest in a pre-defined selection of stocks. Rebalancing happens periodically, and that’s it. Simple and effective!

Sure, investing in funds isn’t the only way to build wealth, but it provides a striking example of how less is more. It’s worth paying attention to.

It’s how I invest my money.

Next, let’s look at the world of business.

Last year I got paddle-boards for my family. With the boards, we got a free book by the company founder, Stephan Aarstol, called The Five Hour Workday. The premise of the book is NOT that we should be lazy. The founder of the company is a savvy entrepreneur who knows how to work hard. 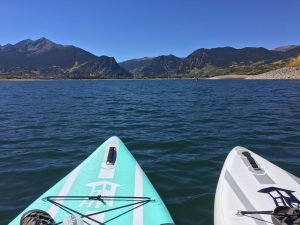 Taking out our paddleboards in Dillon, CO.

He performed an experiment and for three months, switched his entire company to a 5-hour workday, 5 days a week, for the same pay as working a full 40 hours week. He didn’t stop there, by deciding to effectively increase their pay, by offering his staff a cut of company profits!

Optimists would think that the experiment would have resulted in a consistent level of business growth, despite the fewer hours worked. This would equate to getting the same outputs from fewer inputs. Not a bad result.

Doubters would think that result was a drop in business, though perhaps not as much as one would expect. This would equate to getting fewer outputs for far fewer inputs. Again, not a bad result if you really care about giving employees back time in their days. However, this isn’t sustainable for a growth-oriented business.

However, what happened was that the business absolutely took off. Employees were super happy. That part should be obvious. What wasn’t obvious, was that customers were also incredibly satisfied with their purchases and customer service.

Customers told their friends about their awesome paddleboards and the great company behind them. The business was booming, in spite of the fewer hours worked! This would equate to getting vastly more output from fewer inputs.

Over the years since the book was published, the company changed their work schedule again, going back to an 8-hour workday during the off-season, and sticking to a 5-hour work day during the peak summer months. This is a far cry from the 60-plus hour weeks that are common at other growth-oriented companies.

Why the change back to a 40-hour workweek?

A weird thing happened—productivity was fine and we actually grew revenues—but the five-hour workday failed us in a completely unexpected way. People were feeling less connected to the company. When you’re working only 25 hours a week, other parts of your life become bigger and more important.

Especially in the startup world, people actually like going to work and feeling attached to or even consumed by their jobs. So now we’ve switched back to an eight-hour day for most of the year. We do five-hour days in the summer, during our busiest time of year, from June through September. The time pressure makes us figure out how to be more productive.

Tower Paddleboards is not the only company changing the world of work. Basecamp, an innovative software company (formerly called 37 Signals) is famous for railing on the “work hard to get ahead” mentality of tech companies, proudly adopting a flexible work schedule capped at 40 hours a week, with Friday’s off all summer long.

Are you into gardening or permaculture?

I don’t have a green thumb, but my mom does!

I grew up working in our large garden on my most weekends and evenings during the growing season. For some reason, I’ve never picked up the skill, but one thing I’ve learned is that micromanaging plants is a surefire way to kill them! 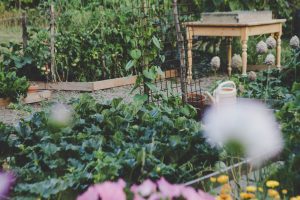 I recall a conversation several years ago with my mom, after attempting to grow a vegetable garden in the backyard of my newly purchased home. I was complaining that my kale, carrots, and potatoes wouldn’t grow. My succulents were wilting. What was my issue? My mom gave me some great advice, water them occasionally and don’t do anything else. Let them be.

It turns out there was a lot of wisdom in that tip. I was over-watering and stepping all over the raised beds. I was getting in the way of nature doing what it does best, grow stuff.

Can we grow more by doing less?

In the world of permaculture, there is a movement of people taking up lazy gardening. Lazy gardening is all about getting more out of less. By being smart about positioning plants as part of a natural ecosystem; less watering, fertilizing, mulching and weeding is needed for a garden to thrive.

Don’t believe me? Look at what this guy is able to grow in a relatively small vacant lot in the middle of an urban area in the UK.

Living Beyond The Pareto Principle

I don’t have time to talk about all aspects of life and how the principle of getting more out of less can apply.

However, it’s clear that there is something powerful about allowing a few vital inputs to do their magic, and not smothering a good thing with a ton of extra activity that will just get in the way of life doing what it does best, GROW!

I hope this topic has inspired you to think way beyond Pareto’s Principle. You don’t need to settle for just getting most of the benefits from a few inputs. You can aspire to get far more out of the few things you put into a project.

I also hope that you are inspired to think about how you can simplify some aspects of your life, for the sake of allowing growth to occur in a more natural and abundant way.

Here are a few questions to guide your journey to simplifying your life and embracing a “getting more from less” attitude:

What area of your life would benefit from abundance with less effort?

What are you doing right now in this area of your life? Think about the inputs/actions taking place. Even if you aren’t doing anything in this area, doing “nothing” is still something!

What few activities/inputs seem to be producing good results?

What few activities/inputs are worth focusing more time and energy on?

What other activities/inputs are not fruitful and worth letting go of?