What A Philosophical Fighter Pilot Can Teach Us About Overcoming Challenges 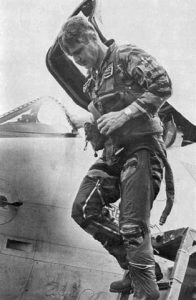 Stockdale exiting his A-4 fighter-bomber weeks before becoming a POW. (Public Domain, Wikipedia)

James Stockdale was shot down in North Vietnam at the outset of the Vietnam war. Held captive for over 7 years, he survived and was awarded the Medal of Honor. What can we learn from his experience? What insights helped him endure under such hardship?

He has written a lot about his experience of warfare and as a prisoner-of-war. His insights paint the picture of a philosopher-warrior. Someone who lived as an active player in the external world, and yet, saw the immense value – his life depended on it – of having a deep understanding of one’s inner world.

It was the philosophy of the Stoics, mainly, those of former slave turned philosopher Epictetus, that shifted Stockdale’s consciousness and shaped his experience as a prisoner of war.

Entering the world of Epictetus

Within moments of being shot down on sortie at the outset of the Vietnam war, as he drifted towards a canopy of trees below, Stockdale heard the crowds of locals rushing towards him. Knowing that he was about to experience a level of anguish one can only imagine, he uttered the following:

The beating he received from the mob who descended upon him – resulting in a broken leg that never fully healed – was only the beginning. Put through brutal forms of torture, Stockdale has often remarked that the physical pain – as bad as it was – was nothing compared to the mental anguish one would suffer without a firm mental posture and attitude about life and how it worked. Stoicism offered him this robust intellectual-yet-practical outlook on life, a perspective that was battle-tested by himself and other POWs.

What a difference a few words can make

It was a chance encounter. Before the outbreak of the Vietnam war, on his final days at Stanford as a graduate student, a philosophy professor offered a small pamphlet to Stockdale as a parting gift. This short book, the Enchiridion by Epictetus, is a handbook of Stoic philosophy written over 2,000 years ago. Stockdale had never heard about Stoicism but eventually devoured the book, committing most of the lessons to memory.

What the Enchiridion lacks in size it makes up for in profundity and clarity of the message. It was this message that held up Stockdale’s inner world as his outer world came crashing down as a prisoner-of-war just a short time after leaving grad school.

What life lesson(s) can we glean from such a book? There are many and it’s worth reading it a few times to let them soak in. However, I’d like to focus on one insight in particular.

We live in two worlds

What did Stockade mean when he said:

Epictetus emphasizes a key Stoic distinction of inner and outer realms of experience. The outer world is a realm of circumstances, environments, and externalities. This outer world is unpredictable and out of one’s control. The inner world, on the other hand, includes the psychological makeup of the individual; including stories, ideas, emotions and all-so-important power of will. The inner elements are more in one’s control.

“No man is free who is not master of himself.” – Epictetus

Stockdale was tortured 12 times and held captive for over 7 years. He emphasized his understanding of this Stoic principle as a key factor in his capacity to withstand incredible pain without giving in to his captors’ demands. Giving in to his captors and turning on his fellow prisoners (his captors were trying to extract confessions for use in propaganda campaigns) would wreak psychological havoc through feelings of shame, regret, and remorse; destroying his precious inner world. Physical torment, on the other hand, would merely result in pain.

According to Stockdale, the former was far worse than the latter.

If the inner world is formed by will, thoughts, emotions, stories, and ideas, the Stoics make clear that these elements are more in one’s control than the external world, which is entirely unpredictable. While one may not be able to choose their thoughts, the meaning one attributes to them, the awareness of them and the amount of energy used to feed them is within one’s control.

“So what Epictetus was telling his students was that there can be no such thing as being the ”victim“ of another. You can only be a ”victim” of yourself. It’s all in how you discipline your mind. ” – James Stockdale

A Stoic would emphasize taking care of one’s inner world to the utmost, as a prime factor in being able to then deal with whatever happens in the external world, as it is, without desiring for circumstances to be any different. As a prisoner (or slave, as Epictetus was for much of his life) finding enduring freedom within oneself is perhaps the only place to discover it.

“What are the benefits of a Stoic life?” I would probably say, “It is an ancient and honorable package of advice on how to stay out of the clutches of those who are trying to get you on the hook, trying to give you a feeling of obligation, trying to get moral leverage on you, to force you to bend to their will.”
― James Stockdale, Thoughts of a Philosophical Fighter Pilot

With luck, we will never have to face the horrors survived by James Stockdale or other captives being held against their will. However, we can learn a lot from the battle-tested philosophy of the Stoics, and their understanding that one’s inner experience of life is all that matters.

It’s confusion about how life works, and a fixation on controlling external circumstances, that is at the root of suffering. This is a theme well understood by the Stoics, and the wise sages of other spiritual traditions, including Buddhism and Hinduism. Perhaps they were all trading notes 2,000 years ago? 🙂

Like any philosophy, however, it’s through the process of application and direct experience that mental concepts become real. Concepts can be forgotten. Where philosophy produces life-changing results in when intellectual ideas become fact through direct experience. Unlike most self-help manuals, Stoicism is designed to be put into practice, and tested under the harshest of circumstances. We can learn from the lessons of Stockdale and Epictetus that philosophy in action can take us very far in life.

Make peace with the outer world as it is. Meet each moment without desire or aversion. Place all your efforts on cultivating an inner world that is steadfast and radiant.

This post was inspired by two books: James Stockdale’s “Thoughts of a Philosophical Fighter Pilot” and the “Enchiridion” by Epictetus. I highly recommend reading both.