David Goggins is a remarkable example of what’s possible when you learn to tap into the power of the mind to accomplish big goals. A Navy SEAL who transformed his body and mind to become an ultra-endurance athlete, Goggins displays a soft-spoken yet hard-as-nails attitude. While running 200+ mile races is clearly not for everyone, we can learn a lot from his attitude and forging of extreme mental toughness.

Goggins is memorable for many reasons.

His endurance exploits are legendary: 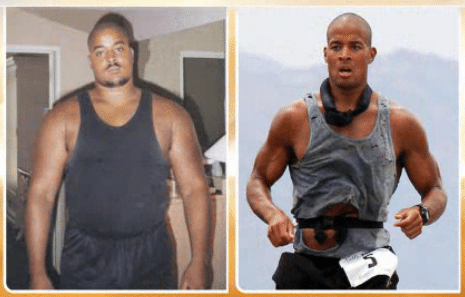 David Goggins. This is what it looks like to loose 100 pounds.

However, there is much more to David Goggins than his endurance accomplishments that captivate the imagination:

Most interesting to me is that he has overcome countless obstacles in the process. Here are a few of the notable ones he has discussed in interviews and his book with Jesse Itzler, “Living with a SEAL: 31 Days Training with the Toughest Man on the Planet.”.

You might think that such a person would have an undying passion for exercise. Wrong! Ironically, David Goggins has a loathing for running and cycling! His wife has said the following:

“He hates running. He hates riding the bike. I’m here to tell you he’s angry every morning he has to do it” but “He realized that in order to gain the attention to raise money, he was going to have to suffer.”

The money he raises through his endurance activities goes to the Special Operations Warrior Foundation.

The most difficult part of training is training your mind. ~ David Goggins

Through his writing, endurance accomplishments, the few interviews and stories he has had featured in the press and the recent book detailing what is was like for a someone to have Goggins move in with his family for a month, a general picture emerges for what it takes to achieve such feats of endurance.

Goggins underlying philosophy is one of setting higher standards than you think could ever be possible. Even when you push yourself to the limit, you are nowhere close to your full capacity.

Our mind can be our biggest motivator to help us achieve more, or it can be our greatest limiter that keeps us stuck within the realm of normal.

Once you recognize that your limits are self-imposed, you can reframe your ordeal to realize your untapped potential and keep going further.

Goggins is famous for making the following claim:

When you think you are done, you’re only 40% of what your body is capable of doing.

That’s just the limit we put on ourselves. ~ David Goggins

In other words, when you think you are toast, you can still do 150% more!

Is there any scientific backing for this? Can we all tap into a hidden reservoir of energy and drive?

I cannot find any scientific research backing up this assertion. However, there are plenty of examples of the role self-imposed limitations play on achievement, as well as how widely-held beliefs can massively influence individual and collective achievement.

In the world of sports, the 4-minute mile was one such example.

Nobody believed it was possible for a human to run that fast for so long. For years, Medical doctors claimed that even attempting such a feat would cause the athlete’s heart to explode! The prevailing belief of impossibility kept the 4-minute mile out of reach until Roger Bannister bested the mark on May 6th, 1954.

In the two months that followed, two other athletes did the same! Since that time countless professional runners have done it and it has become a standard benchmark for the elite middle distance runner. Whereas it was once deemed impossible, it is now viewed as an elite performance, but nothing exceptional.

It just took one person to shatter the prevailing belief and open the floodgates for others.

The same can be said of humans running 100-mile running races. Gordy Ainsleigh did it first (in modern times) on a dare, and since then 100 milers have popped up everywhere. http://www.wser.org/how-it-all-began/

Some 100-mile races are so popular that you need to enter a lottery just to have a chance to run! In North America alone there are over 140 running races of 100 miles or more!

The stories of how enduring the human body are endless.

Steven Callahan survived 76 days lost at sea. His book is one of my all time favorites.

Uli Steck, “The Swiss Machine,” solo climbed 82 peaks in the Alps in 61 daysusing only human power (running and biking between climbs). RIP Uli.

A cynic might say that we cannot possibly accomplish 150% more when we think we are at out limit. Perhaps the cynic is right, but even if they are, there is definitely some degree of untapped potential.

What if, instead of being able to accomplish 150% more than we think is possible, the number is really a little less, like 20% further, or 50% further or 80% further than we thought possible? This still demonstrates a massive amount of untapped possibility. We can do more than we believe we can.

On the flip side, and more likely, what if we are selling ourselves short. What if we are capable of achieving 200% or even 500% more than we have thought possible?

We may never know for sure what the actual capacity of the human body and mind are. However what is certain is that we can do a heck of a lot more

The Power of The Mind

If you can see yourself doing something, you can do it.

If you can’t see yourself doing it, usually you can’t achieve it. ~ David Goggins

What I’ve learned from David Goggins and other endurance athletes is that we can all do much more than we have ever thought possible, not just physically but in other areas of life as well.

This means that when we set goals, we must set our standards high. We would be well served to must make our goals big, hairy and audacious (BHAG).

If we want to achieve more, and we all are capable of it, we first need to believe it and focus on something that seems to be far out of our reach and beyond our comfort zone.

Setting bigger goals is the first step to making the impossible possible. Who knows, you might not only achieve your audacious goal but surpass it!

It’s also worth noting that by mentally setting a goal and believing that it is possible, your chances of achieving it instantly go up. That alone makes setting bigger goals a worthwhile endeavor.

What if you don’t succeed? There is a lot learned in striving for something great, even if you don’t end up getting it.

“Shoot for the moon. Even if you miss, you’ll land among the stars.”

What are you reaching and striving for? Let me know in the comments!